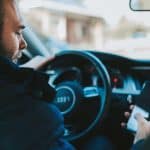 The Court explored the definition of ‘performing an interactive communication function’ which is required in order to secure a conviction.

The law is contained in Section 41D of the Road Traffic Act 1988 and Regulation 110 of the Road Vehicles Construction and Use Regulations 1986. The Road Safety Act 2006 which came into force on 27 February 2007 created a specific offence in relation to the use of mobile phones and handheld devices.

At that time, mobile phones could perform only a handful of the functions now possible. As such, the legislation was drafted to include the following interactive communication functions:

For example, there was no reference to using a mobile phone to play music, take pictures, or make recordings. This then left the courts to interpret the legislation on their own – with very inconsistent results.

Many magistrates’ courts concluded that the purpose of the legislation was to prevent the phone being used for any purpose while driving. This meant that little regard was had to the function actually being performed by phone whilst it was held by the driver.

It also made it very difficult for legal professionals to advise clients on the prospects of success if they wanted to put forward a defence of not using a phone for an interactive communication function.

The case of DPP v Barreto 2019, makes it clear that ‘interactive communication function ‘requires the transmission of data between the phone and another person or device. Therefore, taking a photograph or video on your mobile phone while driving does not fall within the ambit of this legislation. Of course, if you send a photograph then you will be transmitting data.

The prosecution must prove that the device was being used for an interactive communication function in order to secure a guilty verdict. In practice, this will be very difficult to do if the driver alleges that they were using the phone for another purpose. It is virtually unheard of for a police officer to inspect the mobile phone of a driver who has been stopped for this offence, even when the driver has offered to show the officer the phone. The police have simply relied on having seen the driver with the phone in their hand while pressing the buttons. It appears that this may no longer be enough for a conviction.

This does not mean that drivers are free to use their phones while driving for non-interactive communication functions, because there is the risk of prosecution for a different offence. This will depend on the circumstances but alternative offences of driving whilst not being in proper control of the vehicle, careless driving and dangerous driving will be considered.